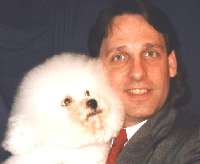 Tresors Blancs is the Kennel Name I selected for my "breeding program." This is actually the second "kennel name" that I have used. The first name that I used was "Roca." But, after several years of being "in" the Bichon Frise breed and realizing that I was serious and was going to remain in this breed, I decided to research and think about a name that I wanted to be "mine" and which also, if possible, reflected my feelings or some aspect of the Bichon Frise breed. Trésors Blancs is French that translates to "White Treasures" which is what I believe Bichons Frises to be.

Because the world is not perfect and thus neither are humans nor bichons, as I am "maturing" in my knowledge of breeding, I believe there can be no absolutes in breeding. There may be instances where a breeder my have to deviate from his/her standards, but hopefully in doing so, it still will produce the dog that he/she believes will be a good representative and/or betterment of the breed. In general, however, I do not think that these standards should be departed from frequently and when this "detour" is taken, it should only have been done by one who has substantial knowledge of the breed, who has researched the lineage of both the sire and dam, and who has carefully considered all of the pros and cons. In addition, when any such known deviation is taken in breeding, I believe that a breeder should be responsible by being open and honest, and to that end, explain the facts, reasonings, and potential "problems" with anyone who may ultimately obtain a dog from such a breeding.

Having said the aforementioned, my current breeding goals/standards can be summed up in the following: {Note: "Bichons" means and applies equally to both Sire and Dam.}

I am also currently contemplating an additional standard of having the Bichons’ hearts examined where it will be determined that the hearts appear to be clear of any diseases (at the time of mating).

Temperament - To breed Bichons who appear to have healthy, happy temperaments and who do not appear to be aggressive, overly shy, or otherwise abnormal.

Personal Appearance Preferences - Currently, my personal preferences within the standard that are guiding my breeding program are to breed for Bichons that have reasonably good movement, beautiful heads (which to me means shorter muzzles), reasonable length of neck, and whose size falls somewhere between 10.5 and 11 inches at the withers.

Frequency of Breeding - Currently I only breed and have a litter approximately every 2-3 years. Sometime in the future, when I have appropriate facilities (i.e., larger home), this frequency will most probably increase. However, at this time, I don’t ever foresee regularly having more than 2 or 3 litters a year. I will never have a number of litters where I could feel any "pressure" to place a puppy where I don’t feel that I have thoroughly screened prospective owners to determine that they appear to have the time and ability to provide an appropriate home.

Not-for-Profit Breeding - I will never breed to make a profit. I will never allow my breeding program to get in a situation where I must have a litter for money to maintain and/or show the other dogs that I own.

In general, my dogs are sold under contract on a co-ownership basis. Dogs that are determined (solely at my discretion) as not conforming to my or breed standards are required to be spayed/neutered. I may also require the spaying/neutering of a dog that is of a "breedable quality," if I believe that the potential co-owner does not have the knowledge (or desire) to properly breed the dog and ensure proper placement of offspring. If the person(s) who purchases an ownership interest in a dog does not, or no longer can, maintain the dog in a suitable manner (determined solely at my discretion) then I retain the right to repurchase the ownership interest in, and take back possession of, the dog.

While some may think the manner in which I place my dogs is "extreme," I can assure you that it is my intentions to ensure that the dog is maintained in a healthy and proper manner. If a person who purchases an ownership interest in and takes possession of a dog from me, properly maintains the dog (i.e., provides proper food, water and clean environment, regularly bathes and grooms the dog, ensures regular veterinary care/checkups/medical treatment, ensures that the dog is not abused and has frequent healthy human care/interactions, etc.), then my ownership interest that I retain will appear "invisible."  I always tell potential co-owners that: "Everything in my contract is for the dog's best interests and to protect my reputation. If there is anything in there that does not seek to accomplish this, then, I will be more than willing to consider amending said provision."

Even though I do not breed that often now to warrant such, in the future when I do have more puppies to place, I will never advertise that I have "puppies for sale" in a newspaper, national general dog magazine, or on an internet site that "sells pets." One might say that having this website or my placing an ad in a dog show catalog, or breed specific magazine contradicts this. I believe this is different, as the goal of this type of "advertising" is not to sell dogs, rather it is to provide Bichon breed information and to hopefully help people in their search for information or a breeder.

Although I think that I am already "spread too thin," and it is probably true as I seem to get myself involved with everything, I believe that I am "there" and can be "there" for anyone who does obtain a dog from me. I too am learning, and of course am not perfect, but I can say that I will try to the best of my ability with the resources that I have to help from the time that a puppy leaves my home until the always untimely death of the "white angel."

I hate to admit this (not out of fear of "retribution" from reputable breeders, but out of a true fear that someone may get the notion that it is "ok" to "follow in my footsteps"-- DON'T... Learn from my experience ! ), but I purchased my first Bichon, Truffles, from a pet store in 1985. I, at that time, like 90% of the population today, did not know anything about pure bred dogs, puppy mills, backyard breeders, wholesale brokers, etc. Even though I loved Truffles more than anything until the day she died, if I had it to do over again, I would not purchase a dog from a pet store. So I put this here to be honest about how I began. But PLEASE DO NOT buy a dog from a pet store or any backyard breeder. Take your time to seek out a reputable breeder, wait if you have to, and teach others to do the same! I mistakenly bred Truffles once (at least it was to a champion) and kept one puppy. It was about at that time, 1989, that I had heard about a "dog show" that would be in Houston. I had never been to a dog show in my life, but it so happens that this was a Bichon Specialty show. I took my dogs to Houston to try to learn more. I was told by breeders that these were really not "breed quality" dogs. Of course like all "pet owners" (and I use that term endearingly), I did not understand the difference and even for a while subsequent to that show, I was in denial. How could my dogs that were so cute and had the best personality (everyone of my friends even said so) not be "breed quality"? They even had some champions in their pedigrees! Well now, I do know the difference, and they were not ! I had the puppy that I kept out of Truffles, Nikki, spayed. I then got my first "show" dog, Shandon, in 1990. She became my first champion. So I would have to say that I began my true "quest" to learn the proper things about dogs, breeding, etc., in 1989/1990. Since that time I have attended many dog shows. I now even exhibit my dogs at shows. It was/is through going to dog shows, meeting other breeders, becoming involved with an all breed club (Austin Kennel Club) and a member of the national breed club (Bichon Frise Club of America), and obtaining and reading all the information that I could/can on Bichons, that I have come to where I am today….and I am still learning !